In The Brothers Karamazov, Dostoevsky makes reference to this painting by Ivan Kramskoy (The Contemplator, 1876) in describing Smerdyakov: “he stands as if he were lost in thought, but he is not thinking, he is ‘contemplating’ something.”

A contemplator greedily stores up impressions he had been under while contemplating, even without realizing it. Why and for what, he does not know. Perhaps suddenly, having stored up his impressions over many years, “he will drop everything and wander off to Jerusalem to save his soul, or perhaps he will suddenly burn down his native village, or perhaps he will do both.”

There are contemplators. Look around.

It’s sad to see how much the Anglo-Russian rivalry has degraded. It used to be about the Eastern Question over the Ottoman Empire, the Great Game in Central Asia, the Cambridge Spy Ring. Today it’s about the respective countries’ hooligans rioting in football games during Euro 2016. We live in a mediocre age.

In five years’ time, I predict that you’ll see Uber rides in which both drivers and passengers are not humans.

It’s easy to see on the driver side: Uber has already announced that it is testing self-driving cars. On the passenger side, you’ll soon see decentralised autonomous investment funds running on blockchains, not controlled by humans. For funds holding Uber shares, their algorithms will decide that it’s good for Uber’s share value by ordering Uber rides using some of their funds.

Imagine the profitability of such kind of rides: no passenger liability insurance, driver benefits, air-conditioning, and all other costs associated with human beings. It’s a win-win for both Uber and the autonomous investment funds.

Welcome to the digital economy.

The majority of writers just makes noise, but some can see well ahead of their time.

I find Japanese novelist Natsume Sōseki such kind of writer. As early as 1908, he wrote in Sanshirō that “Japan is going to perish.” His advice: “Even bigger than Japan is the inside of your head. Don’t ever surrender yourself – not to Japan, not to anything.”

That was written at the height of international respect for Japan – merely 6 years into the Anglo-Japanese Alliance and 3 years after Japan won the Russo-Japanese War – and nearly four decades before Japan perished in atomic bombs.

I’m a political analyst, not an economist. But in many situations, it’s more than enough for me to understand the logic behind the Chinese economy.

As an important example: in the March 2016 National People’s Congress session, why did Xi Jinping set 6.5% as the GDP growth target for the next 5 years?

This number has nothing to do with economics. It’s all about politics and the logic is as follows: 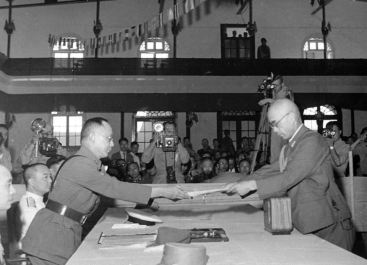 In politics, posture is very important. This includes physical posture. The picture shows Japan’s surrender to China at the end of WWII. Standing on the left and right are the Commander-in-Chief of the Chinese (Ho Ying-chin) and the Japanese (Yasuji Okaruma) Army respectively. It looks as if China was bowing to Japan. The relative heights of the two generals, the length of the table, coupled with the fact that Japan first handed over the surrender document, led to this awkward situation. To achieve a favourable posture, you first need to get the details and the order of actions right.